This project is about reproducing characteristics that I personally associate with film aesthetics. I have therefore dealt intensively with the emulation of film stock and decided to built two film stocks of my own.

In addition, the film aesthetic does not end with matching colors. I’m interested in lens flaws like chromatic aberration, lens distortion, petzval field curvature, and so on. Furthermore, I’m also interested in recreating special “sharpness aesthetics” and other texture elements like Halation, Flicker, Gate Weave and Film Damage.

I will also show you some techniques on how to achieve a higher “color density”. For film print emulation, I’ve created some PowerGrades that will teach you how to be more flexible with Print Film Emulation LUTs from DaVInci Resolve and customize them to your own preferences. Additionally, I designed some dirty mattes and created digital sprocket holes for an overscan look to top it all off.

The “KD 2254 KEM” LUT is designed after “KODAK VISION3 Color Digital Intermediate Film 5254 / 2254”. Labeled “KEM” because it is inspired by the look of “FotoKem’s SHIFTai” project.

The “MONOMOD 2383 A” LUT is designed after “KODAK VISION Color Print Film 2383” with included neg. Film and a Film Matrix. The Final Print is a modified version of the Kodak 2383 LUT by DaVinci Resolve.

Please read “WHY I BUILD LUTS” for more information on why and how I build these LUTs.

“Petzval’s curvature of field” is an optical problem that causes a flat object to appear in focus only in a certain part of the image, instead of being consistently sharp over the entire image area. It does this because of the curved nature of optical elements, which project the image curved rather than flat. In DaVinci Resolve, if you try the Lens Blur Open FX plugin or just draw an oval mask and blur it, the results are not satisfactory. As you can see at the images on the left. So I built my own PowerGrades for a lens blur effect that is more realistic. 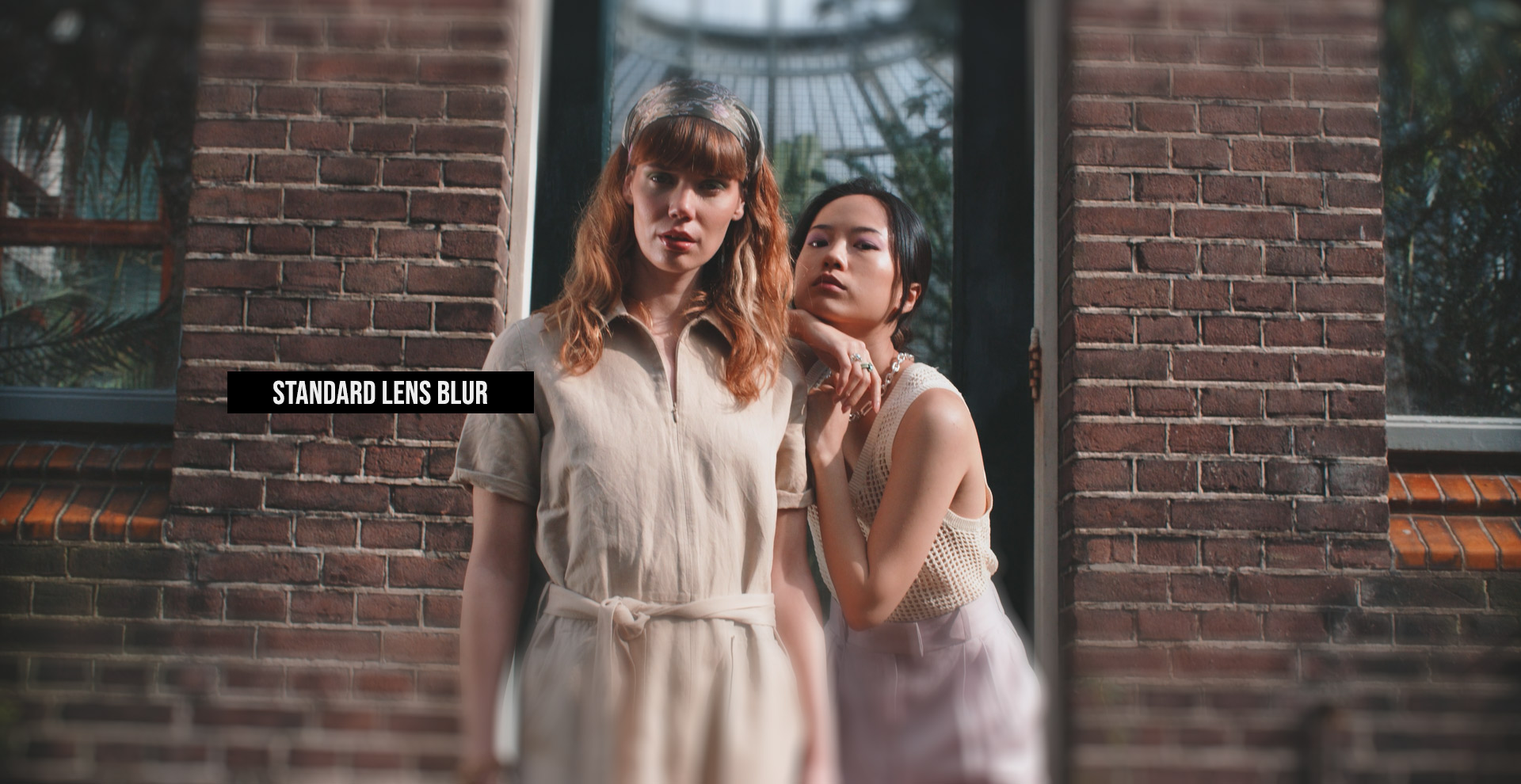 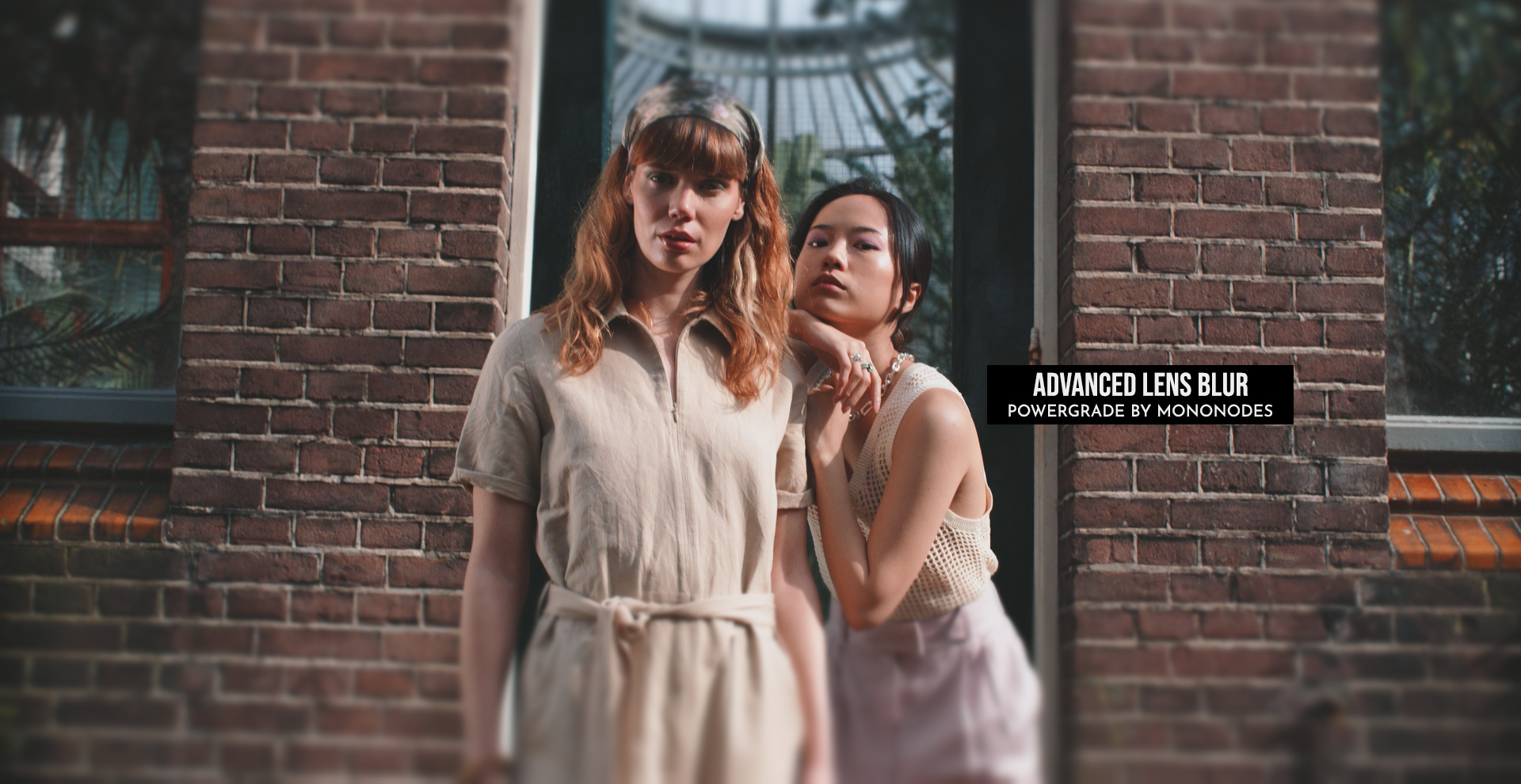 Distortion takes place when the straight lines of an image appear curved or misshapen in an unusual way for the eye. Lens distortion is primarily characterized by very regular and symmetrical patterns. The three most common types are known as “barrel distortion”, “pincushion distortion” and “mustache distortion”. For this package, I designed three types of barrel distortion, depending on the focal length of a lens.

The default setting of Davinci Resolve Glow OpenFX plugin reminds me a lot of the Black Pro-Mist Filter by Tiffen, which will reduce the contrast and overall brightness of your image. It creates a dreamy, blurry effect that “blooms” the lighting. My Powergrade is inspired by the Black Pro-Mist filter, but I’ve changed the settings a little so that it not only softens around the highlights, but instead subtly softens the entire image, which is suitable for day and night scenes. 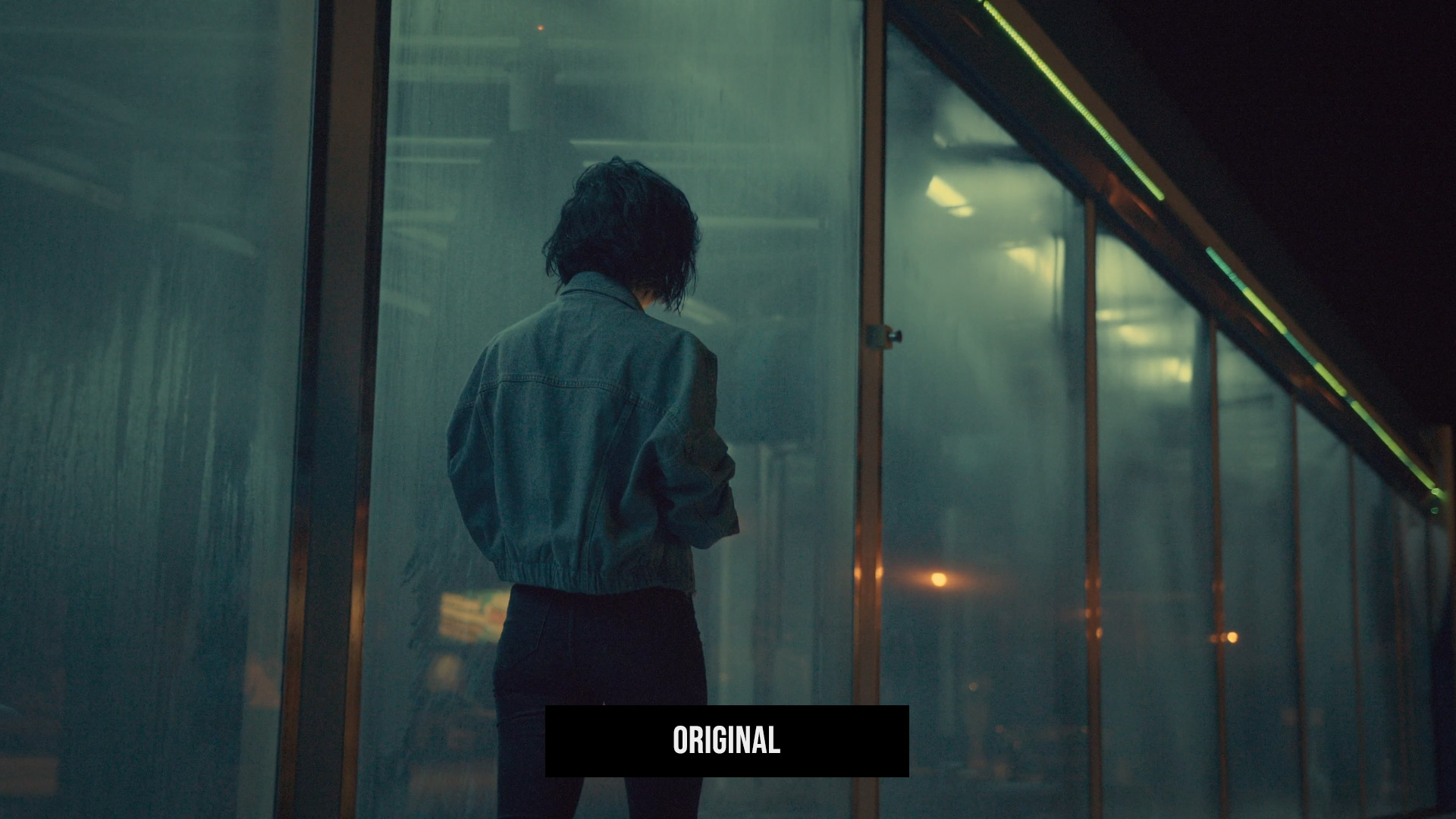 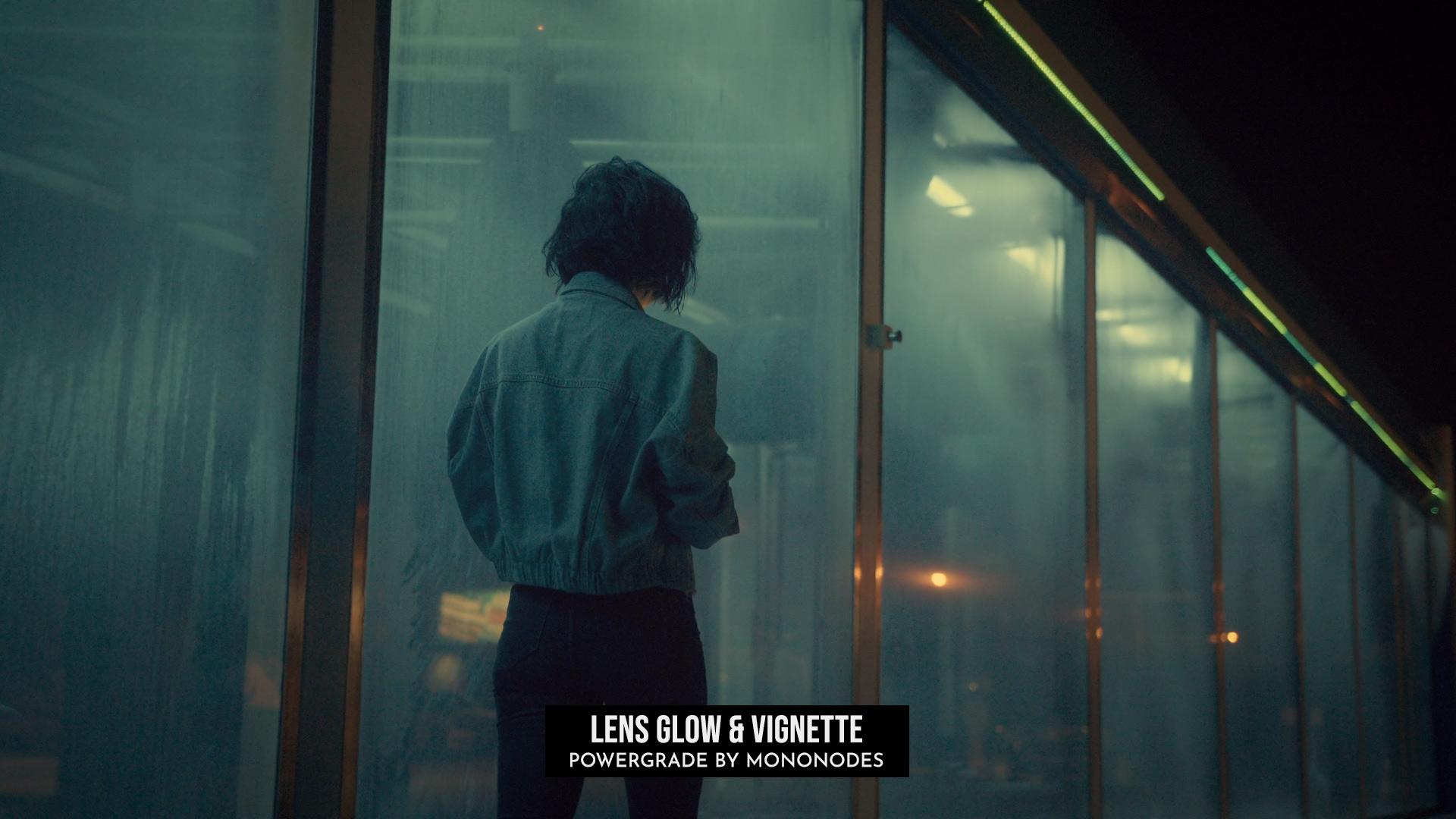 Halation is a characteristic of celluloid film when a bright light bounces back a few times exposing the film a second time only affecting the red layer (and a bit of the green layer) of the film resulting in a reddish/orange glow. The Halation tint may be different based on white balance adjustments / color grading.

Since Resolve version 17.3, an OpenFX halation tool has been included in the Studio version. It’s okay, but the edge detection seems a little buggy and can sometimes produce artifacts. I’m still using my specially created Halation Node tree, which I’ve modified minimally to increase the Halation effect, and the user manual shows you some tricks on how to create a second glow. It always helps to work with reference images to get the image right. Check out “A Study on Halation for inspiration, where I recently added some new still images.

Film grain is the random optical texture of processed photographic film of light-sensitive silver halides that change into pure metallic silver when exposed to light. In the image above, you can see a comparison between real grain and Resolve Grain.

The PowerGrade in this pack is the default OpenFX preset “16mm 500T” by DaVinci Resolve (Studio Version). I still think that “Resolve Grain” is pretty good, and the tool has all the sliders to emulate “real grain”. Like with Halation the best way to fine-tune the grain is to work with references, which you can find here.

Film is always moving. When a film frame passes through a camera, scanner or projector, sprockets control the motion of the frames. A film can become warped or gear can wear out, causing the frame to appear to move side to side.
For this pack I’ve added a few more nodes to the PowerGrade that emulate “micro jitter” combined with a node for the standard gate weave effect, inspired by movies from the 80’s and 90’s. I’ve also added a new “RGB Flicker” node that affects each RGB value separately, which is more accurate.

In this pack you will find some sharpening techniques that mimic the sometimes very hard film sharpening. Which of course can be modified and reduced at will. I also combined it with advanced softening techniques.

Included in this pack is a 20-second video loop with Film Damage elements. If you scroll down, you can see the effect in my preview video called “Illuminate – Film Emulation for DaVinci Resolve“. I used the same overlay for the “FotoKem / Butterfly Comparison Video” which you can find by scrolling down this page. This overlay was created using my “Film Damage Generator” which can be purchased separately.

In the package you will find two PowerGrades that allow you to create “deep, rich saturated colors” that blend well with the surrounding less saturated colors. The first PowerGrade gives you overall “denser” colors for RED, BLUE & GREEN. The second PowerGrade allows you to increase or decrease the luminance values of each color individually.

With these PowerGrades you can create film-aesthetic colors that are usually only possible with Print Film Emulation LUTs. Of course, you can mix the color density nodes with a print film emulation as you like.

I’ve also created some PowerGrades that teach you a technique for smartly manipulating print film emulation LUTs like the popular Kodak 2383 LUT by DaVinci Resolve. For example, you can flatten the contrast curve to create a flat film look, but retain the colors and mid-grey range. The PowerGrade and User Guide will also show you how to easily create a nice highlight roll-off and teaches you how to soften the shadows. Depending on the look you want.

Additionally, I added some PowerGrade specifically for the Kodak 2383 LUT, which neutralizes the blacks and brings the shadows closer to zero to get deep rich blacks. Please refer to the User Guide for further instructions on using these PowerGrades.

This compound node splits your footage into three frames. The preset is designed for a 1:85 Dirty matte, but can be quickly adjusted to other mattes. I separated “dirty matte” and “sprocket hole” for more flexibility. This allows you to add film grain, halos, light leaks, and film damage elements without affecting the sprocket holes.

The holes are centered, so you can move, stretch, twist and turn these sprocket holes until you are happy with the result. You can change color and intensity with curves and log wheels.

The pack comes with “Instructional User Guides”. This includes information on how to install and use each PowerGrade created, making it easy to deconstruct and understand each Node.

There are many ways to set up color management in DaVinci Resolve. Darren Mostyn just posted several videos about it. Here he explained a NODE based CST (Color Space Transform) setup. That’s how I also like to work, and my Film Emulation Pack easily integrates into this workflow.

There is NO Node Tree in this pack. Only PowerGrades. I don’t want to force people to use a specific color management workflow or node structure. Also, I think it’s something very personal.

You should take some time to learn how to set it up so that it suits your needs. I built the PowerGrades to be modular. They can be easily customized to suit your node tree and workflow. The “Film Emulation” nodes can be easily integrated into a “scene-referred” workflow. More information here.

Nevertheless, I’ve included a PDF with this package showing how to create a simple node tree from scratch. With additional information about the node tree for my short films: “Male Dancer” and “Portrait of a Woman with Flowers“.

Visit the “EXAMPLES – Film Emulation” page
for some “Before & After” images.

LUTs & Overlays work well with the free version. But certain PowerGrades like Grain / Lens Distortion and others only work if you have the Studio version, so I recommend using “Film Emulation” with DaVinci Resolve Studio.

If you have any questions / suggestions / comments, feel free
to contact me at stefanATmononodesDOTcom